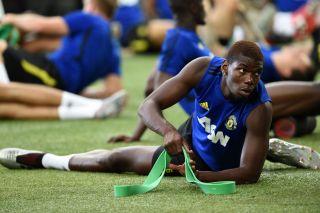 Manchester United will begin their International Champions Cup campaign against Inter on Saturday (12:30 UK time) at the Singapore National Stadium, following wins over Perth Glory and Leeds United in their initial pre-season friendlies of the 2019 tour.

Manager Ole Gunnar Solskjaer has already confirmed that striker Romelu Lukaku will miss the game, which adds fuel to the speculation surrounding his future, with opponents Inter Milan making their pursuit of the Belgium international known.

The last time these two sides met was in the same tournament back in 2014, when the Red Devils beat Walter Mazzarri’s side on penalties but they are now managed by former Chelsea boss Antonio Conte.

Solskjaer is trying to give all members of his squad game time having used a total of 23 players in the first two games – teams are allowed unlimited substitutions – and there’s a good chance we’ll see Fred and Matteo Darmian after both players linked up with the squad on Thursday in Singapore.

READ MORE: Greenwood, Pogba, Wan-Bissaka: How Man Utd could line up against Inter

United will welcome back David de Gea, after he missed the midweek win over Leeds through illness. Luke Shaw picked up a hamstring injury in the first pre-season friendly against Perth Glory, but Solskjaer told the press on Friday that he will be available to feature at some point.

Inter, on the other hand, have named a 27-man squad for the trip to Asia. New signing Nicolo Barella is among the players.

But there’s no Mauro Icardi, whose future remains up in the air.

United come into the game full of confidence, but this will be their first real test as far as opponents are concerned. Fitness levels should be increasing and Inter are without new signing Diego Godin, who will prove to be an absolute monster at the back for them this season.

It should be a tight encounter, but United have more games under their belt and look to be flying at the moment. The Red Devils will be expected to make it three wins from three.