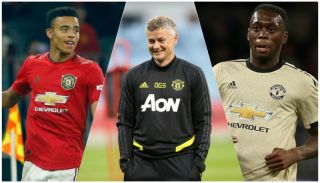 Manchester United take on Inter Milan in their third pre-season friendly of the summer tour. The players arrived in Singapore on Thursday and will train at the National Stadium ahead of the game.

Fred and Matteo Darmian both joined up with the squad in Singapore while Dean Henderson may also make the trip.

Luke Shaw missed the midweek win against Leeds after picking up an injury in the first game of the tour against A-League champions Perth Glory, but is likely to feature at some point.

David de Gea, who missed the win over Leeds due to illness, will play for 60 minutes or longer. This means one of Joel Pereira or Lee Grant won’t make the matchday squad.

Ole Gunnar Solskjaer may also been keen to get as many minutes possible under Aaron Wan-Bissaka’s belt. He’s been very impressive on tour and it’s important we have him in top shape when the Premier League campaign kicks off with a difficult match-up against Chelsea.

Daniel James will continue to get minutes as he looks to settle and families himself with new team-mates and surroundings. He looks incredibly excited to be a United player and it’s promising to see him keen to get on the ball and run at defenders. Inter Milan will prove to be a more difficult test than Perth Glory and Leeds, though.

Paul Pogba will play a significant chunk of the match while Mason Greenwood and Marcus Rashford are both likely to start with Romelu Lukaku ruled out yet again.

Solskjaer has gone on record saying some players will get 45 minutes, while others will play 60-70 minutes depending on match fitness.