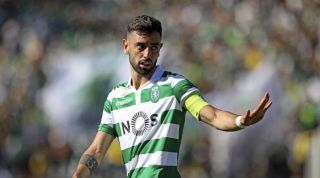 According to reports in Portugal, Manchester United are still yet to make an offer for Sporting Lisbon midfielder Bruno Fernandes.

Correio da Manhã report that Sporting Lisbon may activate their ‘plan B’ in case the Reds do not match their demands for the 24-year-old.

It is said that the Portuguese side will look to make money from the sales of other players if they do not get a €70m offer from United.

Wendel, Raphinha, Marcos Acuña and Bas Dost are all reportedly at risk of being sold if Fernandes stays put this summer.

With only three weeks to go until the transfer window shuts, it is difficult to see why the Reds are not getting a deal for Fernandes over the line.

The Independent earlier reported that United were confident that a deal for Fernandes could still be completed in the coming weeks, despite there being no formal offer made.

Their report claimed that manager Ole Gunnar Solskjær remains interested in the Portuguese international and a £50m bid was being prepared.

Solskjaer desperately needs another creative option in midfield this summer and Fernandes could be the answer. The Sporting Lisbon captain scored 32 goals last season, proving he is the goal-scoring option the Reds need in midfield.

Let’s hope the Reds can finally push on with negotiations for Fernandes and a deal can still be done with time running out before the transfer window slams shut.