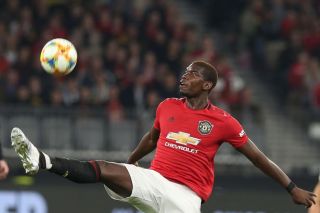 Andreas Pereira has told the Evening Standard he wants Paul Pogba to stay at Manchester United.

While the debate surrounding Paul Pogba has been almost impossible to ignore this summer, his team-mates have been noticeably silence on the situation until now.

It is unknown whether they’ve all been instructed by the club to stay tight-lipped, or simply chose to avoid the bother, we’ve not really heard from anyone in the dressing room on the Pogba front.

Pereira is now the exception as he speaks strongly about the importance of keeping his French team-mate, despite constant links to Real Madrid and Juventus.

The Brazil international said: “In the group he is a great person. It will be very important if he stays with us. He is a very good player and top class as a person as well.

“I learn from him every day. He is one of my closest friends. I have been here with him since 16, so he is like family to me.

“I might steal his phone so he doesn’t speak to anyone!”

Pereira will have his eyes on a midfield spot this season, and manager Ole Gunnar Solskjaer has spoken about how giving him games will help his confidence grow on the pitch.

He might get more opportunities following Ander Herrera’s departure, though it also depends on who else United sign this summer.

Solskjaer decided to give Pereira a new deal towards the end of last season – which I doubt would have happened if José Mourinho was still in charge.

I’m not saying Solskjaer was right and Mourinho was wrong because the jury is still out on Pereira. He hasn’t overly impressed in his performances thus far, so we’re demanding a lot more from him this coming season.