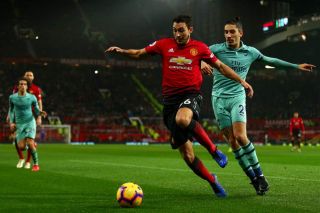 A meeting between Inter Milan and the agent of Matteo Darmian has allegedly led to discussions over a possible Manchester United exit for the Italian this summer.

Without wanting to sound disrespect to Darmian, whose professionalism I wouldn’t dare question, it’s about time something happens because he’s wasting his playing days at Old Trafford.

After arriving from Torino in 2015, the right-back looked solid for about a month before completely losing his way. An Italy international but he doesn’t get call-ups anymore.

The 29-year-old has made a total of 53 appearances throughout the last three campaigns, which isn’t many more than he managed in his first season at the club, representing the Red Devils 39 times.

With the arrival of Aaron Wan-Bissaka, Darmian has fallen further down the pecking order. A move away from Old Trafford makes total sense.

According to Calciomercato, Darmian may get an opportunity to return to Italy with Inter as a possible solution to one of Antonio Conte’s problems.

He can play at right-back, left-back and in a back three.

Hopefully this is the start of something for Darmian.