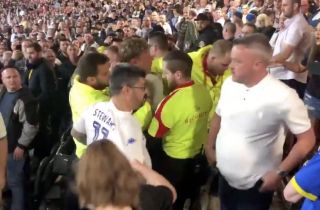 In the video, you can see stewards have already arrived to the scene, with one supporter being held down while another is removed from the stands.

Several punches are caught on camera, but it’s clear whoever videoed the action missed out on what started the altercation.

The Sun claims a Manchester United fan named Caitlin Rose, who witnessed the incident, has put the blame on some Leeds supporters who moved into the section with intent on causing trouble.

Heavy handed stewarding during the game at Optus Stadium! No need for that all! Lads getting turfed out by the neck! #lufc #LeedsEverywhere #UnitedDownUnder pic.twitter.com/vkHsBpPWFX