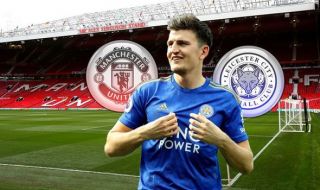 Harry Maguire wants to become Manchester United captain if he can seal a move to Old Trafford, according to reports.

The Sun claim Maguire believes he is the right man to lead the current United side, but United have already had a £70m bid rejected for the centre-back.

Leicester City manager Brendan Rodgers has stressed that the Foxes will not be forced into selling Maguire and will reject any offer that doesn’t meet their valuation of the player, as per BBC Sport.

No matter what happens, as long as United strike a deal with Leicester for Maguire people will say United have overspent.

It’s a lot of money but this is an area of the pitch United desperately need to bolster. For too many years now, we’ve settled for mediocrity and Maguire is better than the options currently available to Ole Gunnar Solskjaer.

Harry Maguire would be honoured to play for Manchester United and follow in the footsteps of his heroes Nemanja Vidic and Rio Ferdinand, according to Sky Sources

Even better if he comes in and proves to be leader-type player because United haven’t got any of those in the dressing room.

Comparisons will be soon made to Rio Ferdinand and Steve Bruce if Maguire does sign and become captain, and there’s a good chance he grew up idolising those players. The Sun adds that they were his heroes as a child.