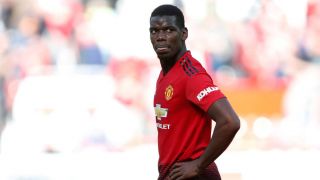 Real Madrid president Florentino Perez has told manager Zinedine Zidane it will be “very difficult” to sign Paul Pogba this summer, according to ESPN.

Zidane’s admiration for the Manchester United has been made no secret this summer, as reported by The Times, and it has been suggested since last season that the Spanish giants would try land him in a mega-money move to please their newly-appointed coach.

Real Madrid have already signed one of the Premier League’s best players over recent years in Eden Hazard, and it was heavily suggested that by adding Pogba to the team, along with the Belgian ace, they would bridge the gap between them and La Liga champions Barcelona.

It has never been reported that United are trying to get rid of Pogba. Quite the opposite, in fact, with reports that they believe his value to be well in excess of £150m, as per the Mirror.

ESPN reporters Rodrigo Faez and Dermot Corrigan add that the salary structure at the Bernabeu is another hurdle to Pogba’s arrival – which probably explains why they’ve been trying to flog off Gareth Bale all summer, as well as the belief Zidane doesn’t fancy the Welsh winger, who has a lucrative contract with the club which runs until 2022.

But Pogba has also been linked with a move to Juventus, though with the recent arrival of Matthjis de Ligt, it remains to be seen if the Serie A champions are willing to make another mega-money move in their quest to become European champions again.

The future for Pogba now looks to be at Old Trafford – for next season at least – but will Ole Gunnar Solskjaer serious make him captain, knowing he’d rather to be playing his football in Madrid than Manchester?

Football fans are fickle and all of this will be cast to the back of people’s mind temporarily if Pogba starts next season strongly.