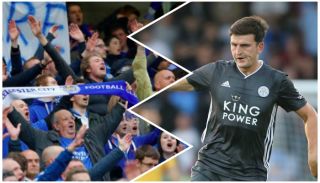 Manchester United transfer target Harry Maguire had “we want you to stay!” sung at him by Leicester City supporters during their 1-0 win over Scunthorpe in pre-season.

I can recall Manchester United fans doing similar when Edwin van der Sar decided to call it a day and hang up his gloves, but little did we know a young David de Gea would join and go on to become the world’s best goalkeeper.

Let’s hope Dave can get back to that level again next season.

However, Maguire played the second half for the Foxes on Tuesday, despite being strongly linked with a move to Old Trafford this summer.

Leicester manager Brendan Rodgers has revealed that two bids have already been rejected for Maguire, and that the club will not budge until their valuation – said to be £90m is met, as per the Mirror.

During the friendly against Scunthorpe though, the Leicester fans made their feelings known about the England international.

According to the Express, they sang “We want you to stay!” at Maguire as speculation about a transfer to United intensifies.

Maguire was linked with a move to the club last year – when José Mourinho was still in charge – but he ended up signing a new contract with the Foxes.

Now his time has come to eventually join one of the top six, and Maguire is obviously aware that at United he will be the main centre-back. That opportunity doesn’t come around very often but the defence at the moment is well below par.