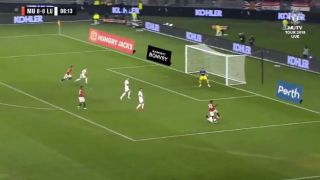 Manchester United have opened the scoring against rivals Leads, thanks to 17-year-old striker Mason Greenwood.

It was a beautiful opening goal for the Reds as Paul Pogba superbly slides in Aaron Wan-Bissaka, whose first-time cross is prodded home by Greenwood.

United started the game brightly and have quickly took advantage of their hold on the game.

This already shows the different Wan-Bissaka can make to United next season, especially if an understanding can be built with midfielders to find him in such positions.

Pace and quality will cause problems for any defence and these are promising signs ahead of the new season.

Watch Greenwood get off the mark against Leeds below: