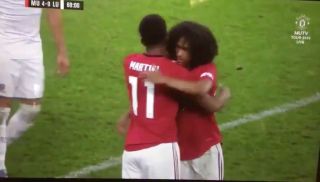 Manchester United are racking up a cricket scoreline against Leeds, the same week England were crowned cricket world champions.

Anthony Martial stood up to successfully take the penalty, which was won by Tahith Chong.

The Frenchman sent the Leeds goalkeeper the wrong way as he sent the ball towards the bottom left corner.

Chong was blatantly fouled inside the box by Liam Cooper, whose sliding tackle looked a day late after he was turned inside out by the Netherlands youngster.

Leeds have been very poor this evening and deserve to be four goals behind.

Ole Gunnar Solskjaer’s men, on the other hand, have been extremely prolific in front of goal.