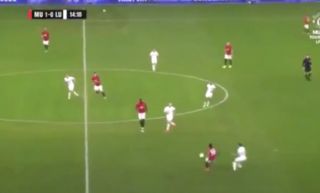 Aaron Wan-Bissaka already looks like an incredible signing after his first two displays in a Manchester United shirt. The right-back showed just why with a brilliant first-half performance against Leeds during which he assisted Mason Greenwood for the opening goal.

The England U21 international has a lot to live up to after costing United £45m plus add-ons following an impressive breakthrough season in the Premier League with Crystal Palace.

And now we can see why Wan-Bissaka is seen as one of the most exciting prospects in English football.

To add to the brilliant assist which saw Paul Pogba make a perfectly weighted pass to the right-back, Wan-Bissaka produced a cheeky flick over the head of Leeds winger Jack Harrison, sending the Man City loan player to the shops.

A terrific piece of skill which would have undoubtedly raised a smile on the faces of United fans.

The Reds went on to win 4-0 with goals scored by Greenwood, Marcus Rashford, Phil Jones and Anthony Martial.

Check out Wan-Bissaka’s cheeky flick below: