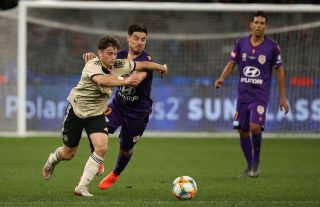 A winger by trade, the 21-year-old started on the left flank against Perth Glory last week.

James put in a lively performance too, certainly enough to make fans excited about one of the club’s latest signings.

But Solskjaer says he plans to play James on both flanks, and at times centrally.

See footage from the latest press conference with Solskjaer below, as per Manchester Evening News:

“Obviously more right and left wing, but through the middle as well.”

Ole Gunnar Solskjaer on the position he sees @Daniel_James_97 playing in at United this season #mufc pic.twitter.com/cHaxrrw1oD

United lack specific wingers in the current squad – on both flanks – so this was a much needed acquisition.

Although playing centrally wouldn’t exactly be something new for the Wales international, with WhoScored data showing James made five starts up front for Swansea last season.

With Mason Greenwood also breaking into the first team and expected to have his breakthrough season at Old Trafford, he should be the preferred choice if Solskjaer plans to rest Marcus Rashford, while the future of Romelu Lukaku remains unknown.