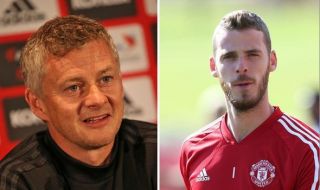 Ole Gunnar Solskjaer is without a number of players for today’s pre-season friendly against rivals Leeds United.

One of those is David de Gea, who, according to RTÉ News, is edging closer to signing a new long-term deal with Manchester United.

The keeper is said to be unwell and wasn’t felling right enough to feature in today’s game, therefore, Sergio Romero starts between the posts.

This is a blow for United to be without one of their best players whilst preparing for the new season.

De Gea didn’t have one of his better seasons last term, but there’s been a lot of distraction around talks over a new deal.

It sounds like they’re near at point where all will be sorted soon.

Solskjaer to MUTV on De Gea absence: “David just fell ill today. He didn’t feel right so we wait for the Inter Milan game for him. We wait for the others as well.”