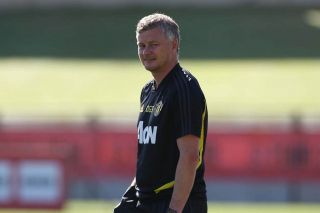 Ole Gunnar Solskjaer is backing Paul Pogba and Alexis Sanchez to be central to his plans next season and expects more new arrivals before the transfer window shuts.

Manchester United need to bounce back after a disappointing campaign last season saw them miss out on a place in the Champions League.

That’s put even more emphasis on Solskjaer’s squad rebuild with a change in transfer strategy, as there has been two signings made thus far, with Daniel James and Aaron Wan-Bissaka coming in.

That’s two talented young and homegrown players, who will do their utmost to make a good impression of themselves at Old Trafford next season.

Solskjaer has now revealed that one or two more faces could come through the doors this summer, although there is a dependence on departures. It’s a concern that United have been unable to flog any of the players they’d happily sell this summer.

“We’re looking at one or two options, but it depends on outgoings as well – it might be more because if suddenly two, or three will go, you will have to replace players,” Solskjaer said, as per Sky Sports.

On another interesting note, the Norwegian coach is backing Pogba and Sanchez to play an important role next season, despite the latter being a player the club would have preferred to remove from their books this summer, whereas the French star has received interest from Real Madrid and Juventus.

“Paul is a fantastic player, a fantastic human being and has always been a great professional,” he added, perhaps controversially. “I’ve had a great relationship with him, I had him in the reserves a few years back.

“And I said [previously], ‘if he’s in your squad, you’d build your team around him’, and I haven’t changed that much since then, so I would say the same now.”

“There’s a top, top player there [in Sanchez] and if we can get him firing, he can get us 20 goals easily.

“We know what he’s capable of and we – me with Alexis and the team – have to find a way to get that out of him.”