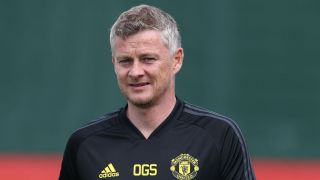 Ole Gunnar Solskjaer has assured Fred he has a future at Manchester United, despite the Brazil international having a difficult first season in England last term.

The midfielder was a big-money arrival from Ukrainian outfit Shakhtar Donetsk a year ago, but has not appeared to have settled since the move.

It’s hardly ideal that Fred has missed the start of the pre-season tour as he got married but the Sun suggests he has held regular phone calls with Solskjaer and will be part of the Norwegian’s plans next season, despite speculation that he could be moved on amid alleged interest from Roma and Galatasaray.

However, the Mirror adds that Fred has flown out to Australia to join up with his team-mates in Perth ahead of their second pre-season friendly with rivals Leeds.

He’s unlikely to feature in the match.

With Ander Herrera no longer at the club and United yet to make any midfield additions, it currently looks like Fred will be given opportunities next season.

A busy midfielder, who appears to buzz around the pitch like a wasp, he needs to learn how to tidy his game up and stop giving up possession so easily. As well as that, Fred needs to involve himself in games more rather than running around like a blue-arsed fly.