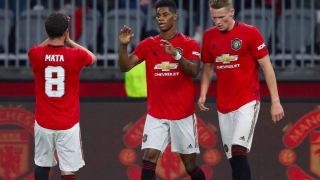 Manchester United cruised to a 4-0 victory against Leeds in the final game of the first-leg of the pre-season tour in Perth.

Mason Greenwood, Marcus Rashford, Phil Jones and Anthony Martial were all on target as the Reds kept a clean sheet for the second consecutive game.

Rashford’s goal was perhaps the most impressive, making the Leeds defenders look silly before cooly slotting past Kiko Casilla.

NEXT:(Watch) Martial cooly converts penalty vs Leeds after Chong is blatantly fouled inside the box

Rashford spoke about the new pressing tactic used by manager Ole Gunnar Solskjaer that has been used Down Under.

“I think there’s a lot to improve on still, but for us it’s about getting the pictures in our heads,” Rashford told MUTV as quoted by MEN.

“It’s been a while since we’ve been a real pressing team, but now we’ve laid down the fundamentals of how we actually want to press.”

“I think now as time goes on we’ll improve and get better.”

The 21-year-old has been one of Solskjaer’s most standout performers so far this tour after recently commiting his future to the club by signing a new long-term contract. This is a huge season for the Englishman who will want to prove to fans he has what it takes to lead the line for the Reds.

Rashford has taken both his goals excellently in Perth and will look to take confidence from these finishes into the new season with the opening Premier League encounter against Frank Lampard’s Chelsea now just over three weeks away.

The Reds fly out to Singapore tomorrow before facing Inter Milan on Saturday at the Singapore National Stadium.