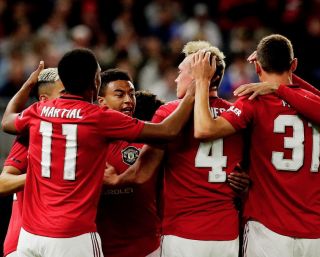 Manchester United made it back-to-back wins on their trip to Australia with an emphatic 4-0 win over Leeds United at Optus Stadium.

It was an entertaining affair in front of 55,274 spectators with Mason Greenwood, Anthony Martial, Phil Jones and Anthony Martial all finding the net.

Ole Gunnar Solskjaer played a different eleven in each half and used 23 players in total as they wore down a Leeds side who arrived in Perth on Sunday with a squad of just 16.

There was no David De Gea for United due to illness, while Romelu Lukaku was another big name absentee as he edges closer to a move away from Old Trafford.

England left back Luke Shaw wasn’t risked due to a hamstring complaint while goalkeeper Lee Grant is not yet fit.

United flew out of the traps and almost went ahead inside two minutes when Victor Lindelof drove forward and released Marcus Rashford but his strike cannoned off the post.

There wasn’t long to wait for the opening goal though; Paul Pogba’s superb through ball found Aaron Wan-Bissaka and the new signing’s low cross was converted by 17-year-old Mason Greenwood.

Pogba looked well up for the contest early on with a free kick that flew just wide of goal followed by a shot that was pushed wide for a corner by Kiko Casilla in the Leeds goal.

The Yorkshire side began to grow into the contest and Pablo Hernandez volleyed over the bar before Jack Harrison beat Wan-Bisskaa before firing a shot into the side netting.

Indeed, they should have been level when Harrison found space on the left and drilled the ball across the six-yard box, but Patrick Bamford’s effort was well saved by the foot of Sergio Romero.

They were made to rue the missed opportunities just before the half hour mark as United broke with Scott McTominay and he found Rashford who sold Gaetano Berardi a dummy before slotting the ball past Casilla.

The game continued to flow from end-to-end as Kemar Roofe headed straight at Romero before Rashford latched on to a superb long pass from Pogba and fired in a shot that was parried away to safety.

Just before the break, it was the turn of Daniel James to strike the woodwork as he took a pass from Rashford in his stride and shot across Casilla.

The half time interval saw Solskjaer ring the changes as he did on Saturday night against Perth Glory, but it did little to disrupt his side’s momentum.

After Harrison dragged a shot wide for Leeds, United made it 3-0 as Phil Jones rose highest to power home a header from Andreas Pereira’s corner.

There were some robust challenges from the Whites, namely Kalvin Phillips and Barry Douglas, and they fell further behind on 68 minutes when skipper Liam Cooper chopped down Tahith Chong in the penalty area.

Anthony Martial stepped up and calmly slotted the ball into the bottom left corner as Casilla dived the wrong way.

The game began to fizzle out after that, although Jesse Lingard went close with a shot from 20 yards, and Ashley Young was booked for a poor tackle on Adam Forshaw which resulted in a square up between some of the players.

It was a satisfactory hit out for United and a pleasing result for supporters who haven’t had many opportunities to see their side play Leeds in recent years.