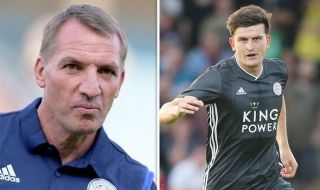 Leicester City manager Brendan Rodgers has told Manchester United and any other club looking to sign Harry Maguire this summer to either meet their valuation or jog on.

The 26-year-old has been subject to heavily speculation over a move to Old Trafford this summer, with Sky Sports suggesting he has already told the Foxes he wants to leave.

Renowned for his organisational skills and ability to play out from the back, Maguire is supposedly ready to join a top club after establishing himself for club and country.

The Mirror has picked up on quotes from Rodgers revealing that two bids have already been rejected for Maguire, and they will refuse to budge until his touted £90m valuation is met.

“We don’t have to sell Harry,” Rodgers said about the centre-back. “Harry has been absolutely brilliant about this right from the word go. He’s a top, top player and a top guy. I think it’s important the supporters know that.

“I’m relaxed about it all. We understand the situation from all points of view because United and City are big clubs.

“But unless they meet our valuation he won’t be sold and it’s as simple as that.”

Rodgers has made it very clear, but he must know at the back of his mind that Maguire won’t want to pass on this opportunity.

The defender was also strongly linked with a move to Old Trafford last year and ended up renewing terms with Leicester. That ensures that the Foxes will get a better deal for Maguire, so all parties should get what they want at the end of the day.

I feel it’s only a matter of time before Maguire is a United player.