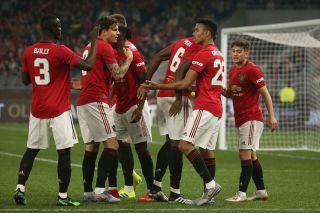 Mason Greenwood has given the Reds the lead against Leeds United.

The 17-year-old showed his goal-scoring instinct to get in the box and finish just seven minutes in.

It was a fantastic move from Ole Gunnar Solskjaer’s side, with Paul Pogba slotting the ball in behind to new signing Aaron Wan-Bissaka.

Wan-Bissaka then put in a pin point cross to find the United academy graduate who slotted home with ease.

The Reds have looked sharp in the opening stages and its great so see Greenwood on the scoresheet early on.

The youngster is very highly-rated at Old Trafford and Solskjaer has already said we will get to see more of him in the upcoming campaign.

Loads of Man Utd fans were thrilled to see the youngster grab the opening goal:

United take the lead inside the first 10 minutes. Pogba tees up Aaron Wan Bissaka who crosses low to Greenwood who taps in from close range. A great move and a first assist for AWB!

Pogba splits the defence then Wan-Bissaka with a delivery we haven’t seen in years & Greenwood taps it home at just 17 years of age.

Not going to lie, got me a bit excited.

If we don’t get a RW then it has to be Greenwood. None of that Lingard/Mata nonsense. Still definitely need a forward tho

WE LOOK SO MUCH BETTER IN WHITE SHORTS!! NEVER BETRAY THEN AGAIN!! Quick play, 1 touch, decent finish from Greenwood. Let's have more of it.

Beautiful goal for #MUFC. Greenwood makes no mistake with Pogba and Wan Bissaka involved in the build up.1nil to#MUFC