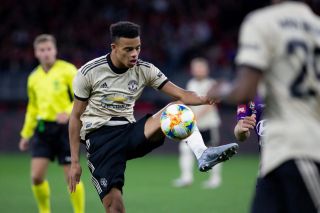 Ole Gunnar Solskjaer has named an exciting line-up to face Leeds United as the Reds play their second friendly of the 2019 pre-season tour.

Romelu Lukaku is not in the squad again, with rumours heating up about the striker leaving this summer.

That leaves Scott McTominay and Paul Pogba in midfield to carry out more disciplined roles.

Marcos Rojo and Eric Bailly start in defence, and it is expected that the club would be willing to sell both players this summer if the right offers are made, as per The Times. Aaron Wan-Bissaka and Victor Lindelof take up the rest of the defence while Sergio Romero is between the posts.

Rojo and Bailly are the most likely defenders to leave #mufc. Tuanzebe may stay rather be loaned out to Aston Villa again #mulive [times]

See the team in full below:

Here it is… the #MUFC XI to take on Leeds! 👊#MUTOUR 🇦🇺