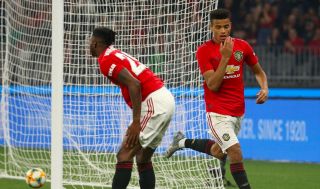 Manchester United’s academy graduates have been the stand out players so far during the summer tour.

The Reds secured their second victory in comfortable fashion against Leeds United at the Optus Stadium, with goals from academy graduates Mason Greenwood and Marcus Rashford and assists from Tahith Chong and Andreas Pereira in a 4-0 rout.

NEXT:(Watch) Martial cooly converts penalty vs Leeds after Chong is blatantly fouled inside the box

As seen in Man Utd app editor Mark Froggatt’s tweet below, all six of the goals scored by the Reds this tour have all had contributions from our academy graduates.

All six #MUFC goals on Tour 2019 so far have either been scored or assisted by an Academy graduate.

The youth system is thriving 🔥

This will delight manager Ole Gunnar Solskjaer who is keen to stick with traditions and continue to bring United’s youngsters through into the first-team.

Manchester Evening News report that the United manager is looking to bring in more young, homegrown talent this summer and have already signed Aaron Wan-Bissaka and Daniel James.

The Reds already have a plethora of young talent coming through from the academy including the likes of James Garner, Greenwood, Chong, and Angel Gomes; it would fantastic to see some of them play regularly for the first-team this season.