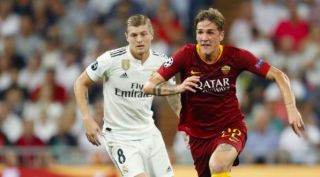 According to reports in Italy, Manchester United are interested in signing Roma midfielder Nicolo Zaniolo this summer.

Calciomercato report that that Tottenham Hotspur are leading the race to sign the 20-year-old star, with Serie A champions Juventus also said to be interested.

However, the report goes on to suggest the Reds are now also in the frame to sign the young midfielder, and are ready to sabotage Tottenham’s efforts to sign him by launching their own move for the player.

Zaniolo made 33 appearances for Roma last year (who scored), after joining as part of the deal to take Radja Nainggolan to Inter Milan. The attacking midfielder made a number of impressive performances for the Giallorossi which has reportedly made him a target for a host of top European clubs.

However, the Reds could also do with a more established creative midfielder who is proven at contributing to goals. Sporting Lisbon’s Bruno Fernandes would be perfect at Old Trafford, and the Independent reported yesterday that United were poised to make a £50m offer or the 24-year-old.