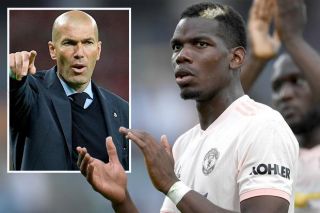 Real Madrid have backed Zinedine Zidane to the hills already this summer with a number of quality signings, but there’s one piece of the jigsaw still missing.

The Spanish giants have been heavily linked with a move for Paul Pogba, who publicly stated he would like a ‘new challenge’ and that it would be a ‘dream’ to play for Real Madrid.

While Zidane has reportedly urged his employer to sign the France international, AS claim it will be difficult to get him out of Manchester United, who have set a price tag worth €170m on the World Cup-winner’s head, as cited by Sport Witness.

The Premier League transfer window shuts on August 8th, so Real Madrid need to get their act together soon if they think signing Pogba is still a possibility this summer. United would be foolish to let him leave and not sign a midfield replacement, and time is running out.

It’s worth keeping an eye on headlines concerning Sporting Lisbon playmaker Bruno Fernandes, the Portugal international who has been constantly linked with a move to Old Trafford this summer. He could be the answer to a potential Pogba exit, as per the Daily Express, but manager Ole Gunnar Solskjaer might want to use both in his midfield next season.

AS state that it will be impossible for Los Blancos to sign Pogba after that date.

Moreover, the Spanish newspaper claims Real Madrid have told Pogba to stay silent because they feel United won’t budge otherwise. His agent and mouthpiece, Mino Raiola, has also been advised ‘not to tighten the rope’ for the transfer, according to the report.

Someone had to tell Raiola to shut it…