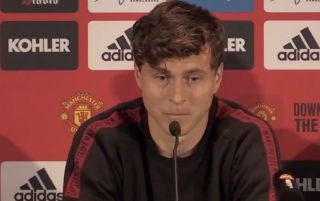 Victor Lindelof has come out and expressed his happiness at being a Manchester United after being linked with a summer move to Barcelona.

The Swede’s agent Hasan Cetinkaya didn’t help the situation last week by confirming interest from ‘a big club in Europe’. He never stated anything about the player’s wishes to stay…

“There is a big club in Europe that wants him, but everything depends on Manchester,” Lindelof’s agent is quoted as saying via Mundo Deportivo.

In an attempt to reaffirm his commitment to MUFC, Lindelof says he is happy where he is and is looking forward to the new season.

“I’m very, very happy to be a Manchester United player and I’m really looking forward to this season to start and very happy here,” the Sweden international said, as reported by ESPN.

Lindelof: “I am very, very happy to be a #mufc player. I am very excited for the new season to start, so that is my answer.” #muzone [espn] pic.twitter.com/F7MfG5Nwvo

Perhaps a few of Lindelof’s team-mates could learn a thing or two about quashing transfer rumours when they emerge rather than letting them drag on, even if their agent adds fuel to the fire.

Lindelof should want a clear mind going into the new season, and with Ole Gunnar Solskjaer looking to build a side for the future he should want to do all he can to be part of that process.

Last season, Lindelof showed encouraging signs by becoming one of United’s most improved players but he must kick on again. And quickly.

Watch a snippet of the press conference below as Lindelof claims to be very happy to be a United player.

“I am very very happy to be a Manchester United player.” 🔴👊@vlindelof quashes speculation of a move away from Man United this summer. #mufc pic.twitter.com/yYB0FzLqqg