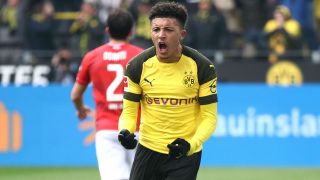 Manchester United fans reckon they’ve spotted a transfer hint from Borussia Dortmund winger Jordan Sancho, though in hindsight it was just an unintentional mix up.

The England international has been touted as one of the most exciting youngsters in world football after a thrilling breakthrough season in the Bundesliga last term.

As a result, he was strongly linked with a move to Old Trafford but it is believed that United’s failure to qualify for the Champions League ruined any chances of that happening.

Fans are now hopeful United will reconsider moving for Sancho next season – along with qualification for Europe’s biggest competition, which won’t be easy considering Ole Gunnar Solskjaer still needs to add more quality to his squad this summer.

Sancho would be a fine upgrade on Alexis Sanchez, who somehow is still at the club being paid more per week than any of his team-mates, and he would also be a massive improvement on Jesse Lingard.

A report by the Mirror shows how the 19-year-old sent United fans into overdrive with a tweet to Man City star Raheem Sterling.

In a tweet that has since been deleted, Sancho asked his England team-mate: “What’s the “Location” next summer bro”.

But he later replaced this tweet with a similar message, stating: “Location video out now ft me n @sterling8 litness,” referencing their involvement in a music video for rapper Dave.

The importance of context, eh?

A year on from now though, and Sancho could be back living in Manchester again, perhaps a house share with close friend Sterling! Not that he needs to house share…