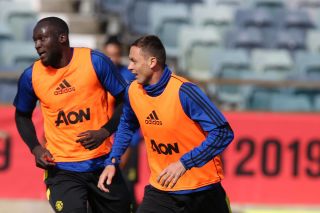 Inter Milan are reportedly expected to make a fresh bid for Romelu Lukaku.

Sky Sports claim the offer is expected to be worth £60m plus add-ons that could see the fee edge closer to United’s valuation of the Belgian striker.

It is believed that the Red Devils are holding out for more than £75m for Lukaku.

Like any club looking to do business this summer, Inter want to get this deal completed as soon as possible, so that Lukaku can link up with Antonio Conte’s squad before the new Serie A season kicks-off.

Losing Lukaku should force United into considering their options up front next season.

While we take great pride in Marcus Rashford coming from the academy into the first team, he has yet to prove himself as a 20+ goal per season striker. That makes him a risk going into the 2019/20 as our main goalscoring outlet.

Lukaku in a system that suits him can bring that to the table, but Ole Gunnar Solskjaer has made his feelings known to the former Everton striker, who fell down the pecking order at Old Trafford once the Norwegian coach arrived.

It’s worth noting that Inter can sign Lukaku beyond the closure of the window in Italy, but United wouldn’t be able to sign a replacement after August 8.

Meanwhile, Italian outlet Calciomercato suggest Inter have identified Duvan Zapata as an alternative target to Lukaku. He scored 28 goals for Atalanta last season and would cost a lot less than Lukaku.