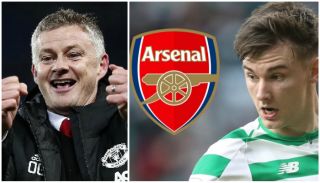 It has almost been a month since Manchester United confirmed the signing of Aaron Wan-Bissaka.

Arriving from Crystal Palace, where he developed through the academy, the England U21 international cost a whopping total of £50m (£45m with £5m in bonuses), as reported by the Evening Standard.

But now with Arsenal trying to sign Celtic full-back Kieran Tierney, Hoops manager Neil Lennon has stressed that the SPL Champions will not be “pushed over” after knocking back two offers, with the most recent coming in at £25m (via Sky Sports).

Celtic consider their defender to be “more experience and rounded” than Wan-Bissaka, therefore, feel the valuations should be closer.

In fairness to the Scottish giants, they are making it very clear that there is no way they will be parting with Tierney unless the price they want put on his head is met.

Their stance doesn’t seem like it will be relaxed any time soon as they refuse to bow to Arsenal’s pressure, with Lennon well aware that Tierney is worthy of a greater transfer fee than what has been offered by the Premier League outfit.

The Celtic boss told reporters when quizzed on the saga surrounding Tierney, as quoted by Goal: “We can’t do anything about what clubs do in England. £50m for Wan-Bissaka is a lot of money and we feel that Kieran is a far more experienced and rounded full-back at this juncture in his career.

“He’s an asset for us and we do have a value for the player and we rate the player very highly. So ‘disrespectful’ is the wrong word, but we’re certainly not going to be pushed over in any negotiations and we’re in a very strong position with regard to a number of our assets in the team.”

He added: “There has been a second bid, the bid has been rejected and it’s as you were He’s a great player and a great talent. He’s just 22-years-old and has so much more to give to the game.

“It doesn’t surprise me that there are potential suitors. It’s a compliment for all the work he’s done over the years. He’s got a long-term contract and we don’t want him to go.”

You can’t help but admire Celtic’s stance in all of this while the player is showing no signs of unrest, but it’s a clear sign how United’s deal for Wan-Bissaka has already influenced the transfer market.

Tierney would undoubtedly strengthen the current Arsenal side, and I believe he would be a good fit for United too, getting the nod over current left-back Luke Shaw.

It would be a big jump for Tierney coming from the SPL to the Premier League, but he’s got an incredible wealth of experience for a 22-year-old.

And, he’s definitely worth north of £25m in today’s market.