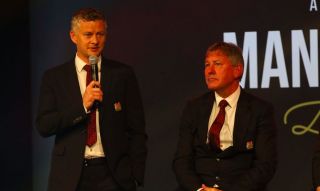 Manchester United manager Ole Gunnar Solskjaer has said that the club needs a player like legend Bryan Robson in midfield.

Robson, known as ‘Captain Marvel’ during his time at Old Trafford, sums up everything the Reds are currently lacking in the midfield.

The former England international had clear leadership qualities and was was a hugely influential aggressive figure in the centre of the park for United.

“I believe so much in this club and this project. To be manager of this club is fantastic. I never had the honour of playing with Robbo but we need a player like him in the team,” the Norwegian said, as quoted by ESPN, speaking at a fan event in Perth alongside Robson.

United’s manager understands the need for a more commanding presence in midfield but it remains unclear who the club will actually bring in with under a month until the summer window shuts.

ESPN report that the Reds are still interested in Newcastle midfielder Sean Longstaff and Bruno Fernandes, but nothing seems imminent in regards to these transfers.

Solskjaer’s side play their final game of the first leg of their tour in Australia on Wednesday against Leeds United at the Optus Stadium.