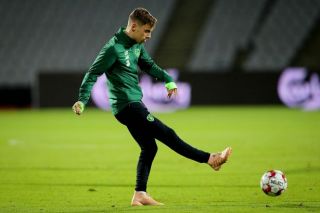 Manchester United academy prospect Lee O’Connor will captain the Republic of Ireland today against Norway in Yerevan to kick-start their U19 Euros campaign.

For those of you living in Ireland, the game will be shown at 3.45pm on RTÉ Two.

The young defender sounds excited to be in Armenia on international duty, even though there were suggestions Ole Gunnar Solskjaer wanted to bring him on tour with the first-team this summer.

At 18, he’s been part of an Irish squad at every level, and will earn his 55th international cap this afternoon.

An incredible achievement for O’Connor, who hopefully has a bright future in the game.

“This is a big tournament and I’m honoured to be here captaining my country,” O’Connor told the Irish Examiner.

“This is the proudest moment of my career. A lot of us players have grown up together with the Ireland teams and now we’re facing the best teams in Europe.

“Norway are good on the ball and will carry a physical threat but I’m confident we can get off to a good start.”

There hasn’t been an Irishman in the United first-team for some time, so O’Connor will be looking to break that duct, which has been made even more possible with Solskjaer’s expressing interest in taking him on the pre-season tour.

That would suggest the gaffer has O’Connor in his sights and may even give him a run in the team this season.

There will be plenty of opportunities with United in the Europa League this season.

The League Cup is another competition Solskjaer may use to blood O’Connor through.

Having him around the likes of Aaron Wan-Bissaka can only be positive as the full-back hopes to continue progressing.