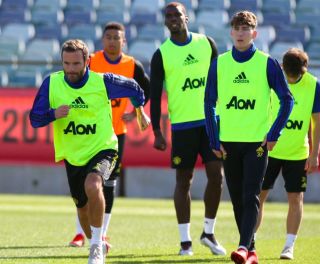 Both Solskjaer’s additions made encouraging starts to life at the club on Saturday with promising performances in the victory over Perth Glory, albeit weak opposition.

Mata, who recently signed a new contract extension at the club, told Andy Mitten for the National:

“Aaron and Daniel are good guys who have the right mentality and hunger to grow in this club. Both give us speed going forward.”

The Spaniard, like many other Reds have pointed out Welshman Daniel James’ electric pace to get in behind defences, which is an obvious threat for Premier League sides this season.

Wan-Bissaka meanwhile, displayed his excellent tackling ability in the Perth Glory game and will be hoping to build on that performance against Leeds United on Wednesday.

However, these two new additions should still only be the start of the club’s transfer business this summer. Solskjaer still needs to oversee wholesale changes if the squad are to compete next year; a central midfielder and centre-back are still needed.

Meanwhile, Mata is pleased with the start the Reds have made to this pre-season tour.

The [pre-season] training is excellent – for different reasons,” the 31-year-old added.

“It has been good from a physical point of view and we’ve had time to work on tactics and the way we want to play. We are still not at our best but we still have five more games and we’re doing OK so far.”

Mata will be hoping to stake a claim this tour to start the opening game of the Premier League season against former club Chelsea on August 11th.