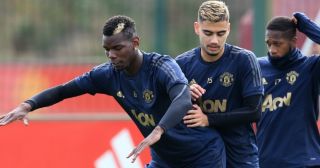 It is clear that Manchester United need to strengthen in midfield this summer.

The recent departures of Ander Herrera and Marouane Fellaini, as well as the soap opera that is Paul Pogba’s future at the club mean manager Ole Gunnar Solskjaer ideally needs two midfield signings this summer.

Solskjaer’s side needs a new creative option in midfield, to help create chances which the Reds struggled to do towards the end of last season. A quality attacking midfielder would also take pressure off the likes of Marcus Rashford in scoring all the goals.

An established defensive midfielder is also needed in Solskjaer’s rebuild; Nemanja Matic is ageing and simply cannot cover the same ground he used to be able to in his prime at Chelsea.

Andreas Pereira has yet to prove he is capable of performing consistently week in week out for the Reds and there is already a lot of pressure on youngster Scott McTominay to perform. Meanwhile, Fred has yet to settle in at Old Trafford and also is inconsistent in midfield.

Even 38-year-old Everton legend Leon Osman would fancy his chances against some of United’s current options in midfield at the moment. Speaking to  BBC 5 Live’s Football Daily Podcast, as quoted by MEN, Osman said:

“I think I’d still fancy myself these days playing against half of those players in Manchester United’s midfield!”

“The standards that Manchester United had years ago when I was playing against them was incredible. There was five or six players and you couldn’t get them all in the team at the same time.

“Nowadays I think it relatively picks itself with the strongest players that Manchester United have.

“Let’s make no mistake, United are adrift. They’re getting worse season after season.

With almost three weeks until the transfer window shuts, reinforcements are still needed in the centre of the park but it remains unclear whether Solskjaer will be able to bring in the targets he wants for the upcoming season.