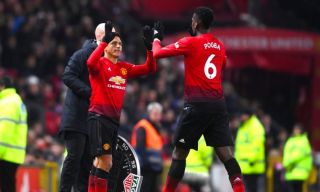 Pogba has been the centre of a transfer saga all summer, with the Frenchman heavily linked with moves to Real Madrid and Juventus.

The World Cup winner said earlier this summer he was ready to leave in order to ‘ seek a new challenge’.

“You have to let Pogba and Sanchez go,” Parker told Eurosport UK.

“Pogba’s a definite one. He wants to go – that’s been stated, but the only thing he’s not done is go on strike. You don’t know whether it’s struck him to do that. When people are watching him week-in-week-out they see what I see. You see him sulking.”

Meanwhile, Alexis Sanchez is another top earner that has an uncertain future at Old Trafford. The Chilean has been a huge flop since his arrival from Arsenal and Parker believes he will have similar problems if he moves elsewhere.

“Sanchez was another massive mistake. It was a ridiculous signing and it was always going to go wrong. He wasn’t needed. But how do you get rid of somebody when they’re carrying so much money in their wage packet? You’d have to supplement them. You might have to give him over 50% of his wages. It’s madness.

“Whatever club he goes to next, they’re going to have the same issues as well.”

However, as seen in the video below, manager Ole Gunnar Solskjaer has confirmed that no bids have yet been made for either of his stars.

According to the Guardian, Pogba looks increasingly likely to stay at Old Trafford this summer, despite wanting a move away.

The report claims that the Reds want £170m for the 26-year-old, which is way off the price Real Madrid are willing to pay for him.

Solskjaer: "We are Man United – we don't have to sell players" pic.twitter.com/k3KRi5q4NQ