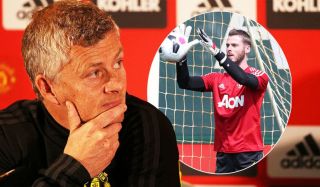 Manchester United look set to tie down David de Gea on a new long-term contract, according to James Ducker of the Telegraph.

Negotiations have dragged on for over a year but United were recently said to be optimistic about the Spain no.1 committing his future to the club, despite ongoing speculation that Paris Saint-Germain were keen to sign the keeper.

This is fantastic news for Ole Gunnar Solskjaer, who no longer needs to worry about potentially losing one best players, although De Gea did have a difficult season last term.

The deal is said to be worth in excess of £350,000-a-week and will make De Gea the highest paid goalkeeper in the world.

De Gea is currently on tour with United in Australia but the squad will travel to Signapore to play Inter Milan once they’ve faced rivals Leeds United.

The contract will reportedly be signed once United return from their pre-season tour.

This deal could go a long way towards convincing new players to join United, knowing one of the best keepers around wants to stay at the club, hopefully feeling we’re headed in the right direction under Solskjaer.

With talk of a new captain, should De Gea be considered for the role?