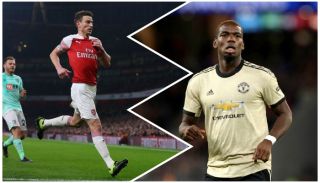 Darren Lewis of The Mirror features regularly on talkSPORT radio and argued this morning that the perceptions of Paul Pogba being worse than AWOL Laurent Koscielny are incorrect and unfair.

To add some background, we are lead to believe Pogba wants out of Manchester United this summer but that messaged has never come from his lips. Sure, his agent Mino Raiola is letting feelings known on behalf of his client, but he hasn’t kicked off a tantrum or refused to show up for club duties.

Arsenal have a bit of a situation of their own. The Laurent Koscielny situation.

Earlier this week, Arsenal released a statement revealing that their captain had refused to go on the US tour. It read:

“Laurent Koscielny has refused to travel to the US for our pre-season tour. We are very disappointed by Laurent’s actions, which are against our clear instructions.

“We hope to resolve this matter and will not be providing any further comment at this time.”

There’s no condoning that behaviour from any player at any club, but this is the Arsenal captain we’re talking about! He may want to leave the club this summer but he’s still paid very well by the club, so it’s unprofessional to not fulfil your duties.

So, that’s where we come to Mr. Lewis on talkSPORT and the very valid points he makes on the perceptions of both players.

There have been times when Pogba could have behaved better or shown more respect towards the club, but it’s the fact that Koscielny is the only properly throwing his toys out of the pram.

Pogba went to Australia with United and featured in their first pre-season tour friendly against Perth Glory.

“In all the time people batter Pogba, he’s never not turned up for work!” 😡@MirrorDarren on perceptions of Pogba being worse than AWOL Koscielny. pic.twitter.com/roPL69dfHh