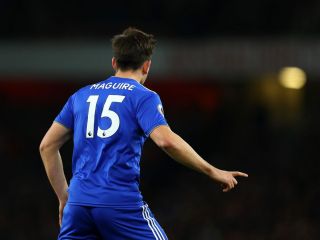 Reports claim Harry Maguire is accusing Leicester City of pricing him out of a desired move this summer.

The Sun claims Maguire, 26, told team-mates Friday he wants to leave, with Manchester United having had a £70m bid rejected by Leicester.

It is stated that the defender is ‘fuming’ the Foxes are holding out for a greater amount and showed his frustration after a training session in France, where they are preparing for the 2019/20 season.

Apparently there was a gentleman’s agreement made last year when he signed a 5-year extension that Leicester would not stand in his way if a fair offer came in.

But how can they explain rejecting £70m? That’s already daylight robbery, a crazy amount to spend on a player like Maguire.

Brendan Rodgers will hope Maguire stays on, but the signs aren’t very good with the player unhappy at this point when he should be excited and looking forward to the new campaign getting underway.

It is unknown if Maguire is prepared to play in their pre-season fixture away at Scunthorpe on Tuesday.

Though, if Maguire starts making noises like this United will definitely come in with another bid. The Red Devils have made it no secret they want the former Hull City defender, who has already worked with Ole Gunnar Solskjaer’s assistant manager Mike Phelan.

It’s a gigantic jump from Leicester City to Manchester United, but Maguire has a familiar face to help him settle in at the biggest club in the world.