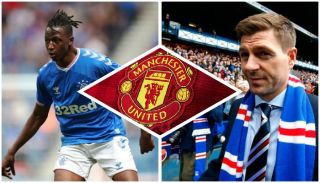 The 22-year-old has revealed he supports Manchester United but suggested he should not say it in public because Rangers manager Steven Gerrard is a Liverpool legend.

Aribo told The Scottish Sun: “I don’t think I should say this knowing how much the gaffer was a hero to me… but I grew up supporting Man United!”

Most United fans would have no issue telling Gerrard who they support. In fact, most of us would let him know without even saying it.

Aribo had a good season with Charlton gaining promotion from League One to the Championship via the playoffs.

Rangers fans will be looking forward to seeing the young and energetic midfielder in action.

They finished second in the Scottish Premiership last season and will look again to push rivals Celtic away from the top spot this coming season.

This isn’t likely to cause any issues between Aribo and Gerrard, but the pair will surely be able to joke about over the coming months.

Then when the United v Liverpool fixtures come around, the pair will need to sort separate arrangements so that neither gets distracted by the game.

Just a bit of fun in good spirit.