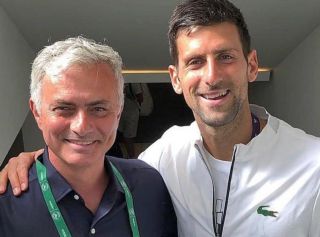 Novak Djokovic is the world’s number one male tennis player at the moment and today he faces the legendary Roger Federer in the final at Wimbledon.

After Djokovic beat Ricardo Bautista Agut in a semi-final encounter, the 32-year-old asked the former Manchester United manager for a photo, which was later shared by the Serbian on social media.

Mourinho is getting to enjoy some time off after being fired by United in December, 2018. Many expected him to walk into a job this summer ahead of the new season but that hasn’t happened, and it’s probably too late now with teams already preparing for the 2019/20 campaign.

But at Wimbledon he can put the feet up and watch high-quality sport without a care in the world.

This time last year he was miserable, on tour in the United States with the United job falling through his fingers.

But, when it comes to the final later today, who does Mourinho want to win Wimbledon?