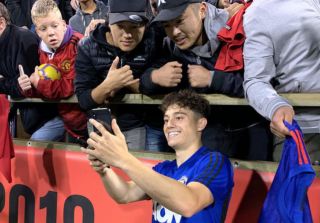 Daniel James aspires to be like Manchester United legend Ryan Giggs whose advice and support has the young Welsh winger where he is today.

Not long after making his senior debut for Swansea City (17 months to be precise), the 21-year-old has signed for United and made his first appearance for the club against Perth Glory in a pre-season friendly.

The former Championship starlet came close to joining Leeds United last January but the deal collapsed. He can now look back with relief at not ending up there but with the 20-times champions of England instead.

Giggs was able to recommend James as a signing for United this summer because he also recently became a Wales international, playing under the most decorated footballer in English football history, so he can get advice from someone who knows a thing or two about succeeding at Old Trafford.

“Giggsy, as soon as I came into the Wales set up, had ambitions for me,” James said, as quoted by Four Four Two.

“The way he brought me and a lot of other youngsters through has been amazing.

“He spoke to me when I first signed for United. His advice was to be myself, which is what I will try to do.

“He wasn’t a bad player was he? What he did at Manchester United was amazing.

“Every young winger looks up to a person like him.

“He was playing in the Premier League until he was 40 and he was still beating players.

“Credit to him, the way he looks after his body.

“It is amazing for me, when I go away on internationals, to learn from people like him. He is obviously someone I aspire to be like.”

These are exactly the words we want to hear from a new signing, but let’s see over the years if James can back it up.

He put in a lively shift yesterday against Perth Glory in front of 50,206 fans, but the line-up form the first whistle changed at half-time and James came off.

For the players on tour it’s about getting fit and staying clear of any niggles or injuries.