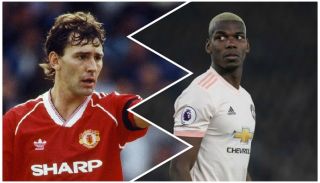 Manchester United legend Bryan Robson has hit out at football agents including Mino Raiola by urging Paul Pogba to keep his head down amid uncertainty surrounding his future at Old Trafford.

Robson says footballers are influenced too much by their agents, in an interview with Sky Sports.

The United midfielder’s agent, Raiola, has been vocal over the past few weeks about his client’s desire to leave United this summer, with Real Madrid and Juventus reportedly interested in signing him.

But Pogba’s agent is not alone in running his mouth to add fuel to this transfer saga. Pogba is also a culprit.

Pogba has gone on record to say he was keen on a ‘new challenge’, as well claiming it would be a ‘dream’ to play for the Spanish giants.

Although there were fears he’d go AWOL, Pogba travelled with Ole Gunnar Solskjaer’s 28-man squad to Australia for the first part of the team’s pre-season tour.

Robson had some advice for the 26-year-old: “You’re a Manchester United player, you’re contracted to them so you have to give everything for the club, the team and the fans.

“There’s a lot of speculation in the media about Paul. He is a top player.

“Get your head down, do your pre-season as well as you can – which, from what I’ve seen in the training sessions, he has done – and if something happens and the club want it to happen, or nothing happens then you’ve got to get on with it.”

Some players trying to engineer moves this summer didn’t turn up to club duties following the off-season, including Antoine Griezmann who has joined Barcelona, and the captain of Arsenal, Laurent Koscielny.

“I think players are influenced far too much by their agents – instead of making their own decisions,” Robson added.

“Sometimes maybe you want some advice on who to sign for and when to move, but at the end of the day, you’re your own person and you can show the path that you want to follow in your career. And I don’t think many players do that – they’re always taking advice from their agents.

“Agents want players to move on because they make money. If a player is loyal to a club and stays there, the agent doesn’t make as much money. I think that’s a big influence not just at Manchester United, but all over the game.

“I think players should sometimes take a good look at themselves in the mirror and make what they want to of their career.”