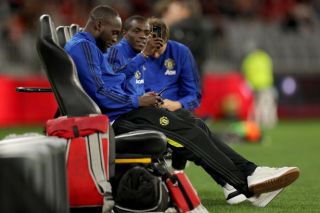 Leekens is the man who gave Lukaku his international debut.

The striker has been linked with a move to Inter Milan all summer, but they’ve yet to meet United’s transfer demands.

Since Ole Gunnar Solskjaer came in as manager, Lukaku has fallen down the pecking order with the Norwegian coach preferring Marcus Rashford.

Leekens said, as quoted by The Mirror: “He’s a fantastic footballer, but the change of coach at Manchester United hasn’t worked well for him.

“He looked released when he played for Belgium and you saw that in the way he played and scored in the recent qualifiers against Kazakhstan and Scotland.

“He needs confidence, he needs to feel wanted. When you hesitate over picking him, he feels it and he doesn’t forget it.

“The moment he feels there’s a doubt over him, he won’t hesitate to do what he thinks is best.

“Now I think it’s the right moment for him to go to Italy, to a country where the football is more tactical.

“He will like to take a little bit of revenge – and show Manchester United what they have been missing.”

The problem here is Leekens completely ignores how poor Lukaku was from the start of the season, when he was still the main man up top.

After two seasons at Old Trafford, he could soon be on the move again.

“He has shown in the past that he’s not afraid to leave a club,” Leekens continues.

“Romelu is a very clever guy. I’m not sure if he speaks Italian now, but by the time he has been there for two months he will be talking fluently – that’s the kind of guy he is.

“Going to Inter and being the main striker would be good for him, he has scored goals everywhere he has gone.

“He’d play in the Champions League too, which he wouldn’t be doing at Manchester United.”

It’s very off-putting when you hear of players giving up because they can’t handle some competition within the squad.

Lukaku should be looking to stay at United for one more year before making a definite decision.

It makes no difference to me because I know United can find a better striker, but for his sake to just give up and push for a move suggests he’s not the type of character we need at the club.

Competition with Rashford should drive him on, rather than the complete opposite.