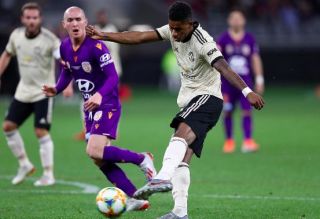 Rashford converted with his left foot in the second half to break the deadlock in a comfortable victory for the Reds.

“It was a pleasant goal to watch because it’s not a typical Marcus goal,” Solskjaer said as quoted by the Mirror.

“When he scores, it’s usually a wonder goal and I’ve been onto him to add those scrappy or instinctive goals from inside the box.

It’s not a pretty goal, but I’ve told Marcus to add these to his tally. He scores wonder goals, but when he can get five or six of these a season, he’ll add to his tally even more,” the Norwegian added.

Solskjaer clearly prefers the England youngster up front to Belgian striker Romelu Lukaku, who has an uncertain future at the club.

Rashford was consistently selected in the number nine role for the Reds last season ahead of Lukaku, and United’s manager is clearly confident of his capabilities to lead the line next season.

The 21-year-old still has a point to prove next season after signing a new contract at the club this summer. Rashford must prove his ability to score the goals United need to challenge next campaign, and should be targeting 20 goals for the club.

Solskjaer is spot on that it is those instinctive strikes that often let Rashford down inside the box, but there was no problem today as he cooly stroked the ball home on his weaker foot.

The arrival of Daniel James now means Solskjaer now has a rapid attack on his hands that should be able to worry any defence in the Premier League along with Rashford and Anthony Martial.