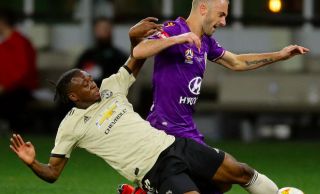 Aaron Wan-Bissaka has impressed fans in his first appearance for Manchester United.

The England u21 international showed his exceptional tackling ability and pace going forward in the second-half against Perth Glory.

Albeit against weak opposition, it is a promising start for the new right-back who joined earlier this summer from Crystal Palace.

United fans are delighted to see a specialist young right-back who is clearly solid in defence. Wan-Bissaka’a arrival should mean that we see less of Ashely Young in defence next season.

United won the first game of the tour 2-0 with goals from academy graduates Marcus Rashford and James Garner at the Optus Stadium in Perth.

The Reds face Leeds United in the next game on Wednesday in the same arena.

Check out some reaction to Wan-Bissaka’s encouraging start below:

Wan-Bissaka oh my, what a player

I'm in love with @awbissaka already. Lovely and precise tackles

Not up against much, but @awbissaka looks a top quality signing, we may have an absolute gem. #MUFC

Perth start a break down Wan-Bissaka’s wing. AWB drops down low, blocks the runners forward path, sticks a leg in and wins possession. I shouldn’t be marking out over right backs actually doing the basics correctly but thats what years of watching Young does to you 😂 #MUFC #GGMU

@awbissaka is the real deal…. looks like a great signing already, and if nothing else, keeps young out the lineup!! 🙂 #MUFC #MUFCvPER #GGMU