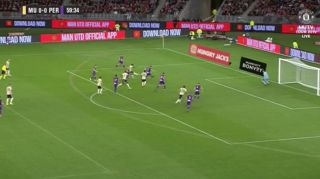 Marcus Rashford has opened the scoring for Manchester United in the second half against Perth Glory.

Perth Glory thought they were being clever passing the ball around the back until Rashford got hold of the ball and instantly struck the ball past the goalkeeper.

It was really poor from the home side to be playing in such a way at the back against a team like United, who have been pressing high up the pitch since the beginning of the match.

The United academy graduate spotted danger and inflicted more pain on Perth Glory by making them pay for their mistake.

This is what we expect to see from Rashford this season. Better finishing!