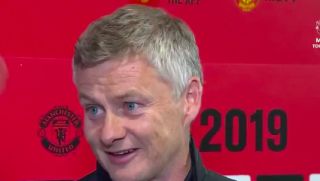 Manchester United manager Ole Gunnar Solskjaer was impressed with new signing Daniel James in his first performance during the 2-0 victory over Perth Glory.

James was selected as part of Solskjaer’s first half eleven against the Australian outfit and showed glimpses of his lightening pace getting in behind the opposition defence.

It was a promising first game for the Welsh winger and Solskjaer praised the youngster’s performance.

“He started well, it was a good start and we’ll nurture him and its exciting to watch him play many games.” he told MUTV as quoted by MEN.

As well as James, the club’s other new signing Aaron Wan-Bissaka also impressed in what was a much more convincing second-half display for the reds.

United broke the deadlock through Marcus Rashford’s strike and doubled their lead in the closing stages with a fantastic strike from academy graduate James Garner.

See Solskjaer’s verdict on United’s first run out of the season below:

Ole's post-match verdict on a comfortable victory for #MUFC…

What pleased you most about our first #MUTOUR game?