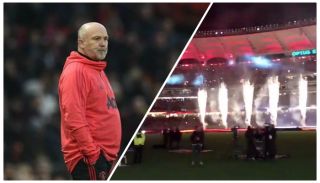 Mike Phelan has obviously travelled with Manchester United to Australia for their 2019 pre-season tour.

Now confirmed as part of Ole Gunnar Solskjaer’s first-team staff, Phelan is also responsible for preparing the players for the upcoming season.

Having played under Sir Alex Ferguson as well as spending years as part of his coaching staff, Phelan is a good head to have around the squad. He understands what the club is about and where the club should be — which is currently miles away from what we learned to expect.

However, with the players in Perth, it was an opportunity for some locals to spice things up with some culture for every in attendance to enjoy.

They preformed a show which Phelan uploaded to Twitter, with the following caption: “I guess that’s what you call a pre match warm up.”

I guess that’s what you call a pre match warm up 😳👏🏻🇦🇺 pic.twitter.com/LMfSBrAv41