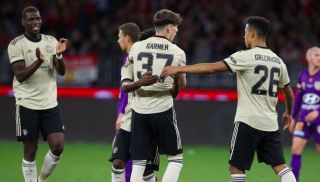 Manchester United manager Ole Gunnar Solskjaer has said that Paul Pogba is under consideration to be the club’s next captain, according to the Telegraph journalist James Ducker.

Pogba cast doubt on his future this summer by saying he is ready to seek a new challenge elsewhere, therefore leaving Old Trafford. The Frenchman has been repeatedly linked with moves to Real Madrid and Juventus but played in today’s 2-0 victory over Perth Glory in the first pre-season game in Australia.

And as per Ducker’s tweet below, Pogba could become the Reds’ new captain.

Solskjaer says Paul Pogba will be under consideration for the captaincy next season. Asked about Lukaku's future and whether he expects him to be a #MUFC player at the start of the season, he said: "We'll see." Said it was "private" when asked if he'd told Lukaku he wants to stay

Solskjaer needs to select a new captain this summer following the exit of Antonio Valencia. Pogba being under consideration means the United manager is confident the midfielder will stay at Old Trafford for next season. He has shown little commitment to the club this summer so it would be a strange choice of captaincy, but perhaps Solskjaer thinks a more senior role could bring the best out in Pogba.

David De Gea is another obvious option for club captaincy, if the Reds can agree on a new contract extension for the Spaniard with just a year left on his current deal.

It will be interesting to see who Solskjaer will choose for the captaincy, and if it is indeed Pogba then a lot of questions will be raised by Man Utd fans.