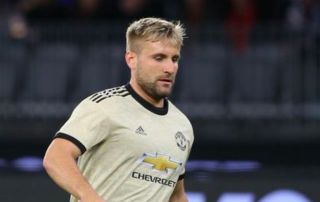 Luke Shaw was brought off injured in the second-half of Manchester United’s first-pre-season friendly against Perth Glory.

The left-back’s injury was the only concern on the night for the Reds, who strolled to a comfortable 2-0 victory over the Australian outfit.

“It was a bit tight, he felt some tightness so we’ll have to assess it and rest him for a few days,” Solskjaer told MUTV as quoted by MEN.

Shaw walked straight down the tunnel after coming off injured and we hope the injury he sustained is not too serious.

It’s certainly not ideal to see a player pick up an injury so early on in pre-season, especially for Shaw who needs a full pre-season to improve his fitness ahead of the new campaign.

As seen in BBC reporter Simon Stone’s tweet below, Shaw may have tweaked his hamstring.

Shaw goes off. Looks like he said 'hamstring' as he went off.

Meanwhile, second-half goals from Marcus Rashford and James Garner secured United’s win at the Optus Stadium. The Reds return to the same venue on Wednesday to play old-rivals Leeds United.