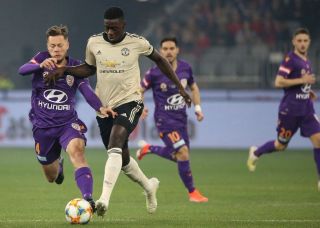 Axel Tuanzebe has been working towards getting more first team opportunities for some time.

The 21-year-old claims to be ready after spending time away from Old Trafford on loan spells. Last season at Aston Villa he played a key role in Dean Smith’s side gaining Premier League promotion, which should give him the experience needed to be a decent top flight defender or more!

Manager Ole Gunnar Solskjaer is expected to make a number of substitutions at half-time to help the other squad members gain fitness.

Perth have thus far spent the game with eleven players behind the ball, but that is to be expected when United come to town.

But part of the reason for that is because Perth Glory can’t get close to United’s goal.

Tuanzebe has been a rock at the back, calm and collective on the ball which is assuring when we as fans are beginning to panic with the club yet to sign a top class centre-back.

The young English defender left a good impression on the pitch in the first 45 minutes. See below for tweets from United fans on Tuanzebe.

A commanding and confident outing so far from Axel Tuanzebe. Could he be the answer to our defensive issues?#mufc #mutour pic.twitter.com/rP6Aa0Moil

Really impressed with the pressing so early into pre-season, the players are looking fitter. Daniel James looking really bright and Tuanzebe not letting their striker get any luck at all.

Axel Tuanzebe so cool and calm on the ball. You love to see it 👌💪 #mufc pic.twitter.com/2jZTK4wXA5

Decent half. No goals.
Tuanzebe was good.
James as well.
Hoping for a better 2nd. #mufc