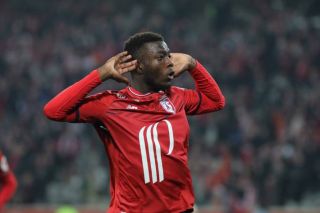 Nicolas Pepe’s agent has added fuel to the fire by hinting his client is open to everything.

Paris Saint-Germain and Bayern Munich looked most likely to sign the exciting Lille forward, but Pepe apparently has interest in the Premier League too.

A recent report by The Sun suggests Everton have joined Liverpool, United and Arsenal in chasing the £59m-rated Ivory Coast international.

His agent, Samir Khiat, said in an interview on French TV show L’Equipe Mercato, as quoted by The Sun: “Nicolas is open to everything.

“The aim is for him to sign in the right place. PSG is a possibility.

“Today, all parties need to reach an agreement. There are exchanges and discussions.

“He is wanted by a considerable number of clubs.

“For him the most important thing is to be wanted and to go to a good club in which he will play and continue to progress.”

With Romelu Lukaku linked with an exit this summer, Ole Gunnar Solskjaer should be weighing up his options for a replacement. Neither Marcus Rashford or Anthony Martial are ready to lead the line on their own yet, and the latter rarely plays as a centre-forward as it is…

Pepe just had a superb 22018/19 campaign, hitting double figures for goals and assists playing both out wide and up front. Few of our players have recorded such a tally in recent years and that needs to change if United are looking to challenge again.

He looks an ideal fit for Solskjaer’s style of play, quick and nimble, and the speculation hasn’t died down.

At PSG, he could be seen as a potential replacement for Neymar.